This article appeared originally in the May 2016 Levitt Letter.

“My job is boring; the mall is ugly; my in-laws are impossible.” Not life-or-death issues, such complaints are labeled First World problems. Our planet has 25 First World countries in which people don’t starve, life expectancy is high, and child mortality is low. Per the School of Life’s “First World Problems” video, human nature leads us to worry—to our detriment—about whether we have sufficient possessions based on examining people around us, especially on television.

The 11-minute video (described above) explains that such materialism leads our perception of happiness to become comparative and relative; this tendency instigates discontentment. Advertising exhibits what more we should have and leads us to envy others. First World citizens are productive, stressed, and too tired to read or exercise enough. Loneliness is a side effect of wealth creation. Too often we forget the importance of kindness, forgiveness, and wisdom.

Harvard graduate and Wall Street Journal reporter Charlie Wells recently examined “The Hidden Reasons People Spend Too Much” and concluded: “The answers seem to lie in psychological impulses and blind spots that are tough to recognize, let alone overcome.” An explicit budget, he advises, makes us more likely to resist desirable but unaffordable expenses. His article’s takeaway points include: 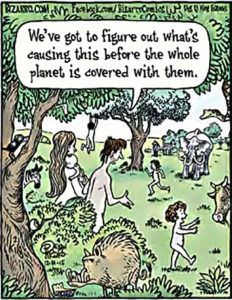 Imagine a thin green line, above which everyone is wealthy, from pensioners to billionaires. Thanks to their moderate lifestyles (relative to their means), they live in financial comfort regardless of their net worth. New York Times columnist Paul Sullivan (“Wealth Matters”) explains: “Rich is a number” that “has nothing to do with the security wealth brings someone.” His grandfather, a postman, was the first person he knew who lived above the thin green line.

Financial advisor John T. Reed’s sensible shopping list “for the rich”includes do’s and don’ts that inspired my wife and me to leave our 1979 kitchen as is. Don’t buy a bigger house than you need (2,500–3,000 square feet maximum). If you have no waterfront and dock, then renting a boat is smarter than buying. Own a horse only if you live on horse property with a stable and ride each week. His numerous guidelines echo the wisdom of a classic camping adage: “Less is more.”

Closely examining this article’s source material in light of biblical wisdom reveals that even secular reasoning leads to the value of seeking first the Kingdom of God rather than earthly treasures. (Matt. 6:33) This secular-meets-biblical path reminds me of how science corroborates the Creation, Noah’s flood, and the day the Earth stood still. (Josh. 10:13)

Copyright © 2016 Zola Levitt Ministries, Inc., a non-profit 501(c)(3) organization. All rights reserved. Brief passages may be quoted in reviews or other article. For all other use, please get our written approval.
Our Jewish Roots
Levitt Letter
Tours
Podcasts