This article appeared originally in the July 2012 Levitt Letter.

Who can indict an industry better than an insider? Remember The Insider, a movie about a tobacco executive who blew the whistle on cigarettes?1 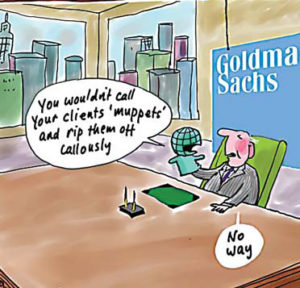 Greg Smith, a former Goldman Sachs executive director, said that his colleagues referred to clients as Muppets.2 The sharky stockbrokers smile to our faces while concealing feeding frenzies. What the brokerage firm A.G. Edwards did to Zola, this ministry, and my family years ago inspired the semi-monthly Wise As A Serpent series of articles posted toward the bottom at www.levitt.com/essays. Perhaps calling it the “financial disservices industry” would warn of its “buyer-beware” playing field when it comes to investing.

A recent AARP The Magazine article, “The Two Faces of Your Financial Planner,” describes an industry insider pulling back the curtain on how money advisors really work—and why “good” planners sometimes do very bad things to investors.3 The writer, Allan Roth, specifies what planners can and can’t do for you and lists ten ways to get the best money advice.

Staff Sgt. Robert Bales is the U.S. soldier accused of shooting 16 women and children in their sleep in Afghanistan. Before that, as a stockbroker, he was ordered to pay $1.5 million in restitution for decimating an older couple’s nest egg. Nonetheless, he STILL is licensed to advise you and me on how to invest our life savings!4

Years ago, I asked God if it was His will for Zola and me to trust such a con man—a supposedly sharp, ethical financial “advisor,” introduced by a Believer from my children’s Christian school. Then came my calling to strengthen the body of Christ by alerting fellow Believers to be as wise as serpents about these hucksters (Matt. 10:16).

Even the well-meaning ones can be trading on misinformation from their firms’ investment bankers.5 Mixing conflicts of interest with human nature brews a cocktail as unhealthy for your financial future as cigarettes are for your lungs.

Hopefully, this article’s footnotes and links will inspire you to read, think, and pray before investing (Matt. 25:14–23). One silver lining here is that I’ve never seen Vanguard in any headlines about scandal, and Scott Burns (a real, credentialed financial expert, unlike yours truly) heralds them as a legitimate, low-cost option.

For most of us, there’s no better investment than paying off debt, including the mortgage, while maintaining a cushion of savings equivalent to 3–6 months of income.

Copyright © 2012 Zola Levitt Ministries, Inc., a non-profit 501(c)(3) organization. All rights reserved. Brief passages may be quoted in reviews or other article. For all other use, please get our written approval.
Our Jewish Roots
Levitt Letter
Tours
Podcasts