This article appeared originally in the July 2005 issue of the Levitt Letter.

We have had requests for a report on our Missionaries in Israel, which we provide here. Thanks to all who have supported the “To the Jew First” fund.
— Zola

March 2005’s Gospel outreach to Israel did not begin there, but on the plane going over there from JFK Airport in New York City. Paul Colley, a personal friend, missionary, and co-laborer in Christ for twenty-one years, accompanied me on this outreach.

Once Paul and I boarded our flight bound for Tel Aviv, Israel, we immediately felt led by the Holy Spirit to pray that any Jewish person sitting next to us on the flight would be especially open to a witness about Yeshua being the Messiah of Israel. Not long after that prayer was said, two men sat next to us. One man was named Joseph. He sat next to Paul on the long flight to Israel. He was a middle-aged man with an Orthodox background. He was very genial, tolerant and open to our bearing testimony about Yeshua being the Jewish Messiah. He asked us about our reasons for traveling to Israel. Paul and I told him that we were sent by several ministries (Zola Levitt, Brit Hadashah and the Shalom, Shalom Messianic congregation) that support Israel and send us there to spread the good news of Yeshua the Messiah’s first coming and His soon return to the land of Israel as King of kings and Lord of lords. 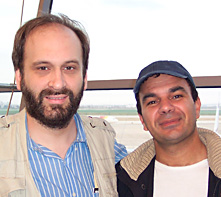 The man sitting next to me was a cordial fellow from Beit Shemesh (House of the Sun) (a small city located one hour southwest of Jerusalem). The man’s name was Opher.

He informed us that he was a pantomime artist who did mute dramas of the great Bible characters in the Old Testament like Abraham, Isaac and Jacob. He showed us a presentation on his mini-DVD player. After viewing his reenactment of the Akedah(Abraham offering up his son Isaac), I shared with Opher that this was a Messianic type ofAbba (God) offering up for Israel and the world his one and only unique Son for our sins. Opher quickly surmised we were Believers in Yeshua. 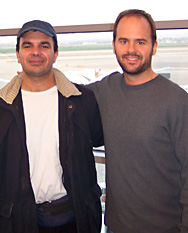 Paul and I affirmed that not only did we believe He is the Messiah, but that all of Jesus’ first followers were Jewish. I then gave him a Gospel tract in Hebrew that gave a list of all the major prophecies made about Messiah in the Tanach and the corresponding fulfillment by Yeshua in the Brit Hadashah (the Hebrew phrase for The New Testament). Opher wanted to go through some of these prophecies with us. At this point in our conversation, a young Orthodox man from the Chabad movement rudely interrupted our conversation. He had been sitting in the row in front of us. This man was attempting to discourage and dissuade Opher from hearing the Gospel. The Chabad movement promotes the ridiculous notion that the late Rabbi Menachem Schneerson of Brooklyn New York was the Messiah. 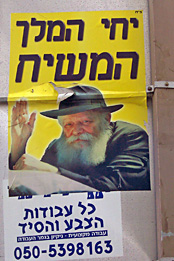 The picture of Schneerson published in Jerusalem says of him in Hebrew: “Long live the King and the Messiah.”)

I bluntly challenged this man and told him in no uncertain terms that all the evidence from Scripture and Jewish history indubitably points to Jesus of Nazareth being the only One who is the Messiah foretold by Moses and the Prophets. The young man replied by claiming that Yeshua could not be the Messiah since his father was not Jewish.

By this, I assumed that this man was reflecting a tradition of Orthodox Judaism from the Talmud that teaches Jesus’ father was a Roman soldier named Pantera who had an illicit relationship with his mother Mary. This was further verified when the man told me to read the Gemara, which is the second part of the Talmud, providing commentary and explanation of it. A pilpul (a theological debate in Jewish circles) began to develop between this intrusive fellow and me.

My reply was to say that Yeshua’s Father was God and His lineage was indeed Jewish on His mother’s side. I went on to inform him that Joseph, particularly, could not have been the natural father since he came from King Jeconiah’s genealogical line (see Matthew 1:12), which God cursed and spoke through the prophet Jeremiah that none of Jeconiah’s descendants would ever sit on the throne of David as King of Israel! “O earth, earth, earth, hear the word of the Lord. Thus says the Lord: ‘Write this man down as childless, a man who shall not prosper in his days; for none of his descendants shall prosper, sitting on the throne of David, and ruling Judah anymore,” (Jeremiah 22:29–30).

Thus, Joseph, the legal father of Jesus, could not have been the physical father of Jesus because of this curse pronounced on Jeconiah’s descendants. That would include Joseph and prevent him or his children from reigning on the throne of David as King of Israel.

But Jesus was not affected by this curse, because his physical Jewish descent came from David through his mother Mary, who conceived him by the supernatural power of the Holy Spirit (Matt. 1:18; Luke 3:21–38).

When asked, the Orthodox man expressed complete ignorance about this key prophecy in Jeremiah 22:29–30. So I went on to say to this man that Jesus could not have had Joseph as his physical father. Furthermore, the prophets foretold that the Messiah would be the Son of God and therefore have God as His father (see Psalm 2:6–8; Isaiah 7:14)! The Orthodox man angrily expressed his bewilderment over this. When I point-blank asked him if he had read the evidence for Yeshua being the Messiah as historically written by Jewish eyewitnesses in the New Testament, he, of course, smugly answered “no.” Then I replied, “You can’t very well dismiss something you are ignorant of, nor have honestly investigated.”

After this, the man said nothing more to me. Satan, no doubt, was using his interruption to discourage Opher from investigating these important matters for himself. Nevertheless, Opher accepted a copy of the New Testament in Hebrew and a Gospel tract as well. Pray now that nothing or no one will keep him from coming to faith in the Messiah Jesus.

Copyright © 2005 Zola Levitt Ministries, Inc., a non-profit 501(c)(3) organization. All rights reserved. Brief passages may be quoted in reviews or other article. For all other use, please get our written approval.
Our Jewish Roots
Levitt Letter
Tours
Podcasts