This article appeared originally in the March 2004 issue of the Levitt Letter.

Todd Baker is one of the missionaries we send to Israel with our “To the Jew Fund.” Rev. Baker is our head missionary and visits Israel several times each year in answer to God’s command: “You shall be witnesses to Me in Jerusalem, and in all Judea and Samaria” (Acts 1:8).

On this amazing Gospel outreach to the Jewish people of Israel, the Lord indeed “did awesome things we did not expect” (Is. 64:3). One powerful example of this happened in Jerusalem while we were witnessing for the Messiah to the Jewish people there. After morning prayer, we felt led by the Spirit to pray at the Western Wall and then walk through the Jewish Quarter of the Old City.

Our stop at the Western Wall was a distinct display of the providence of God; while we were praying, an Orthodox Jew approached us to ask us if we were Jewish. He asked because he wanted us to help him make a minyan in the synagogue adjacent to the Western Wall so that he could say formal prayers from the Kiddush (the official prayer book of Judaism).

A minyan in Jewish law is required to have a prayer service and is a group composed of ten men above Bar Mitzvah age (13 years old) who must be present before a prayer or synagogue service can occur. We jumped at this opportunity because we knew this was a golden opportunity from God to witness to these Orthodox Jews. So, through an interpreter, I told this gentleman that we were Jewish in our heart by virtue of the fact that we have Jesus, the risen Messiah, living in us. 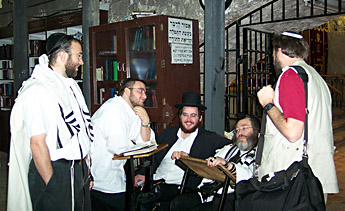 After the prayer service, one of the Orthodox Jews asked where we came from. When we told them that we lived in Dallas, TX, one of the men asked me if I knew a certain Rabbi there. I said that I not only knew him well, but also, that he came to visit Jewish patients in the hospital where I worked as chaplain. And then, the other two Orthodox men said they knew this Rabbi, too. One went to Yeshiva school with his son, and the other had attended this Rabbi’s synagogue when he used to live in Dallas ten years ago!

What are the chances that these three men, totally unrelated to each other, knew this Rabbi whom I also know? God obviously arranged this meeting in the synagogue next to the holiest site in all of Judaism, so that the Messiah Jesus could lovingly be shared with them. This allowed us to share our love for Israel and the Jewish people and to tell how God is regathering them to their ancient homeland in preparation for the return of the Messiah as foretold by Moses and the Prophets.

We then told them that both the Tenach (Old Testament) and Brit Hadashah (New Testament) reveal this Messiah to be none other than Yeshua min Nazarit (Hebrew for “Jesus of Nazareth”). Incredibly, they listened to us without the rebuff or visible displeasure that one might expect, gladly receiving our testimony concerning Jesus in their own synagogue, and receiving from us Messianic Jewish Gospel tracts giving further explanation and proof from the Jewish Scriptures why Jesus is the Messiah and must be believed in for salvation.

As we were returning to our car that evening, we noticed a man in a wheelchair playing with a puppy. We stopped and petted his small dog and began to share about Jesus being the Messiah. He was obviously interested because the Ruach Hakodesh (Holy Spirit) of God was opening his heart to the Gospel, so much so that he invited us into his house for a deeper conversation.

At his home, he told us that he had a friend who was a Jewish believer in Jesus the Messiah, and that his friend had extensively shared the same things we were telling him about Messianic prophecy in the Tenach, and how they are fulfilled in Yeshua alone. We then had an hourlong Bible study from both the English and Hebrew texts of the Scriptures.

One major subject of Messianic prophecy we studied with him was that the Messiah would be raised from the dead as King David foretold 1,000 years before Jesus was born (Psalm 16:10-11) along with the corresponding fulfillment by the resurrection of Jesus of Nazareth in Acts 2:22-36.

In broken English, he said he could accept that Jesus is the Messiah and was the same as God! We were quite amazed at what the Spirit of God was doing. We went over Scriptures that clearly pointed to Jesus as being the only valid way to God and the sole means by which one is saved from the penalty of sin, and the power of Hell and death. This salvation consists in believing that Jesus is Adonai (Lord) and that God raised His Son from the dead to give us life with Him forever (see John 14:6-7; Is. 49:7-8; Rom. 10:9-10).

After this, we went through the plan of salvation as laid out in Paul’s book of Romans, known as “The Roman Road of Salvation.”

When we completed this study with him and made sure he understood this life-giving message of the Gospel, we asked him if he would like to invite Yeshua into his heart as Lord and Messiah to become a fulfilled Jew born anew in Messiah. He eagerly answered “yes” and prayed with us and was gloriously saved right there! He then exclaimed to us several times over, “Yeshua Ha Mashicah” (Jesus is the Messiah) and “Yeshua is the same as God.” Needless to say, we greatly rejoiced with the angels in Heaven over this soul who repented and believed in Jesus the Messiah to truly become a fulfilled son of Abraham.

Coming out of his house after witnessing this miracle of salvation, I thought to myself that if I were unable to go to Israel anymore, or if my life should abruptly end, it was worth all the arduous toil, long hours of witnessing, and twenty years of hardship, struggle, and studying the Scriptures to see this one dear Jewish brother become a child of God through his faith in the Jewish Messiah.

Copyright © 2004 Zola Levitt Ministries, Inc., a non-profit 501(c)(3) organization. All rights reserved. Brief passages may be quoted in reviews or other article. For all other use, please get our written approval.
Our Jewish Roots
Levitt Letter
Tours
Podcasts