This article appeared originally in the May–July 2003 issues of the Levitt Letter. 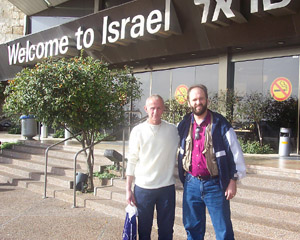 Each new Gospel outreach in Israel means new challenges rich with new witnessing opportunities—a time for ministry to Israel, a time to see God’s providence and power revealed there—a time to proclaim the risen glory of Yeshua the Messiah. Our outreach of April 2003 was thankfully no different in this regard as we began on the airplane destined for Tel Aviv. On our way from London to Tel Aviv, Robert and I sat next to a Jewish man from London. His name was Brian. Brian told us that his father was Jewish and his mother a Gentile. He converted to Judaism some thirty years ago. He also fought in the Yom Kippur War of 1973. From talking with Brian we knew he was a very angry and hurting man by the fact he told us his wife died just six months earlier. It was obvious he was still going through the stages of grief. We then witnessed to him how Jesus can fill the emptiness of his heart with His power, love, and peace. But we further said none of us could earn or be good enough for God, that it was only His grace and mercy that can save us from our sinful selves.

The God of Israel did this by providing the ultimate sacrifice for our sins through the sufferings and death of Israel’s Messiah as foretold in Isaiah 53 and accurately fulfilled by Jesus at His trial and death. Brian’s anger was calmed, as he seemed touched by this message of God’s love. He then accepted a Messianic Gospel tract and we concluded our witness to him by saying that the Messiah could replace his sorrow with joy, his emptiness from being alone with Messiah’s abiding presence giving true purpose and meaning to life. He thanked us for these words and promised to read the Gospel tract showing how one can be saved. Please pray for this man that he will have such an encounter with the Man from Galilee. 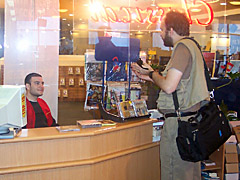 We had positive and powerful witnessing encounters in Tel Aviv. Robert and I went into a music store and talked to a young Jewish man named Ori (which in Hebrew means “my light”). I was looking for Handel’s Messiah on CD because I accidentally left mine at home. This young man was 22 years old and had an excellent knowledge of classical music and said he loved Handel’s great masterpiece. He told us his favorite song in the Oratorio was “And He shall purify the sons of Levi” from Malachi 3:3. This allowed an open door for us to share with Him why Yeshua is the Messiah of Israel and how He fulfilled these Biblical prophecies in His life, death, and resurrection that were sung in Handel’s Messiah. We said these Messianic prophecies mark and identify who the real Messiah would be. Our focus was on the prophecies that foretold the Messiah would be pierced in His atoning death. Thus we showed Ori from the Hebrew text those prophecies about this in Psalm 22:16; Isaiah 53:5–8; Zechariah 12:10 and their fulfillment in Yeshua’s death on the cross in John 19:7. Ori was amazed.

We offered him a Hebrew New Testament and some tracts going into more detail about how Yeshua fulfilled these prophecies as Messiah. This young man was so profoundly grateful for this gift that he said to us, “What you have given me today is invaluably important to me.” I responded by telling him that we believers in Yeshua are indebted to the Jewish people for giving us the Scriptures and the Messiah. His reply blew us away, leaving us astonished and surprised. He said, “It is I who will be forever in your debt for these things you brought to me today.”

I was almost in tears and moved beyond words at this witnessing encounter. Ori’s overwhelming gratitude for receiving the Word of God reminded me of when Jesus marveled at the great faith unexpectedly shown by the Gentile centurion in Matthew’s Gospel (Matt. 8:5–10). In the same way, similar to Jesus, in all my witnessing experience for Christ in the U.S. for 19 years, I have seldom found such overwhelming gratitude shown for receiving the Scriptures by American Christians as Ori in Israel expressed to us when we gave him the Word of God! 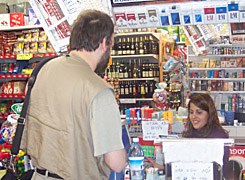 The chance to witness can occur almost anywhere, as it did one day when we stopped at a mini-mart and pool hall to buy some soft drinks. In the course of our purchase we ended up talking to a young lady working there. Her name was Moran. Robert and I shared with her how the Jewish Messiah of Israel is the central person of Jewish history and Bible prophecy that binds the Tenach (Old Testament) and the Brit Hadashah (New Testament) together. When we offered her a free copy of a Hebrew New Testament, she excitedly exclaimed, “I have always wanted to read this book, but could not find it.” We joyfully responded by saying to her that God obviously arranged this very moment as a divine appointment so that she could read for herself about Israel’s true King and real Messiah as truthfully documented in the New Testament. We also gave her a “Prophesied Messiah” bookmark provided by Zola Levitt Ministries that lists all the major Messianic prophecies that were fulfilled by Jesus of Nazareth. 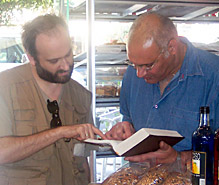 The next day in Tel Aviv while walking the streets, Robert wanted to stop in a bakery he spotted to buy a pastry or two. During his purchase we started a conversation with the owner (whose name was Ezekiel) about the restoration and regathering of the Jewish people back into the land of Israel as a major fulfillment of End-Time prophecy and a sign of Messiah’s soon return. We showed him these prophecies from Deuteronomy 30:1–13;Amos 9:14–15 in the Hebrew text. He also read the great prophecy of Isaiah 66:7–9 about Israel becoming a nation again in one day after going through great travail and suffering and how this prophecy was amazingly fulfilled with modern day Israel being declared and born a nation in one day, May 14, 1948, just after the Jews experienced the unspeakable horrors of the Holocaust a few years earlier!

Initially Ezekiel seemed irritated and uninterested when we first came in. But as the Holy Spirit began to open his eyes, his whole countenance changed and was beaming with excitement.

We then went on to say to him that the prophecies of Israel’s restoration and regathering were just one stream of Bible prophecy that has been accurately foretold and fulfilled by God to the letter. We said that the other major field of prophecy in the Jewish Scriptures is the prophecies about the Messiah called Messianic prophecy. Naturally, from that point on, in our witness to Ezekiel we focused on Jesus of Nazareth as being the Person who fulfilled many of those prophecies when He came the first time and will complete the rest of them when He returns. We asked Ezekiel if he wanted to study and know more about Jesus being the Messiah by reading the Brit Hadashah and the prophecies about Him in the Tenach. He answered with an enthusiastic yes and we gave him a Hebrew Bible containing the Old and New Testaments with a list of the major Messianic prophecies Yeshua fulfilled. What a thrill it was to see this man become joyous and highly interested in the good news of Israel’s Messiah. In September we plan to follow up and see if at that time he will make a decision to believe in Jesus the Messiah.

“Oh, the depths of the riches both of the wisdom and knowledge of God! How unsearchable are His judgments and His ways past finding out” (Romans 11:33). God is opening the eyes of Israel slowly to the pierced One they have long rejected, which means His coming is near, for the veil is being lifted from Israel’s eyes (2 Cor. 3:15–16). Truly God is preparing the Chosen People for His return in these last days, as evidenced by our witnessing encounters.

Copyright © 2003 Zola Levitt Ministries, Inc., a non-profit 501(c)(3) organization. All rights reserved. Brief passages may be quoted in reviews or other article. For all other use, please get our written approval.
Our Jewish Roots
Levitt Letter
Tours
Podcasts